01 – “Chance the gardener”: Guidelines for the management of social research aimed at people at risk of social exclusion

The guidelines for the administration of social research constitute the main trait of the Project and further underline its innovative character: to become an instrument of good practices at the service of European entities that want to develop research based on social hardship.
The output consists of two main parts. One part is dedicated to theoretical and empirical analyses, and the other will focus on a practical approach that is to be conducted through direct experiences. This method was essential in defining a replicable model and also a transferable one which could be inserted into other social realities. The entire analysis and the consequent articulation of the guidelines were structured into different phases in order to accurately identify the final result: 1. Desk Analysis; 2. Qualitative Phase.
Finally, Quantitative Surveys (05) were administered, focused on the issues of school drop-out and in particular on the ways in which this phenomenon has affected the lives of the target subjects, followed by comparative analyses.
All involved partners prepared a preliminary analysis which served useful to the first phase of the output’s structuring. This was done in order to establish the best development strategies in accordance with the socio-cultural patterns which characterise each of the project partners’ countries.
The institute of innovative research Me-We, as coordinator of the specific project activity, was responsible for the final drafting of the guidelines as well as the collection of data from foreign colleagues which were published in both Italian and English.

In addition to the digital text, which can be downloaded on this page, the paper version in 100 copies has also been published. Both texts have been drafted with the European rules for scientific publications. 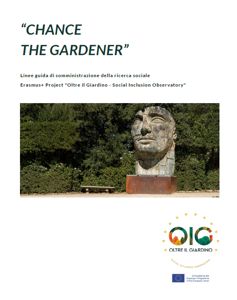 Guidelines for the management of social research

This website uses cookies to improve your experience while you navigate through the website. Out of these, the cookies that are categorized as necessary are stored on your browser as they are essential for the working of basic functionalities of the website. We also use third-party cookies that help us analyze and understand how you use this website. These cookies will be stored in your browser only with your consent. You also have the option to opt-out of these cookies. But opting out of some of these cookies may affect your browsing experience.
Necessary Always Enabled
Necessary cookies are absolutely essential for the website to function properly. This category only includes cookies that ensures basic functionalities and security features of the website. These cookies do not store any personal information.
Non-necessary
Any cookies that may not be particularly necessary for the website to function and is used specifically to collect user personal data via analytics, ads, other embedded contents are termed as non-necessary cookies. It is mandatory to procure user consent prior to running these cookies on your website.
SAVE & ACCEPT